Half Bad
By Sally Green
YA F GRE

A gripping fantasy page-turner right from the start! Set in contemporary England, this story revolves around the struggle between the white and black witches who live, unrecognized, among the general population. Told from the point of view of Nathan, a “half code” who’s mother is a white witch and father a black one, nothing is as simple as it seems. At seventeen he is trapped, beaten, and kept in a cage like a wild animal in an attempt to determine his true characteristics. There’s plenty of action in this first-of-a-trilogy book, and you will be eager to get your hands on the next installment, “Half Wild,” due out in March 2015. 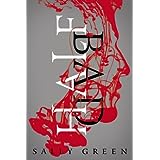